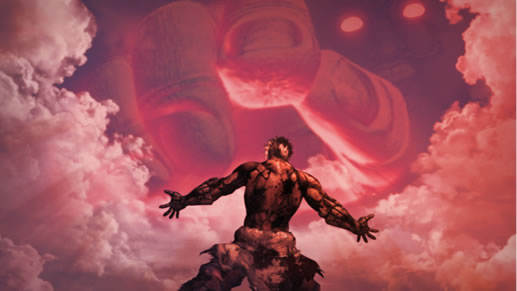 I’m not even sure where to begin.

I knew almost nothing about this game until about 20 minutes ago. Now I know that I will pay my hard earned money to play so much more of it. This game has Bayonetta levels of crazy.

Some of my favorite games are the ones that do NOT have any limits to how insane they can get. No More Heroes and Bayonetta are two of the prime examples I go to when I describe my love for insanity in video games. I’m almost certain that Asura’s Wrath will be another to proudly present among these wonderful examples of what a video game is capable of. This game is nuts. When anything can get the response of me shouting at my televion “WHAT?!?!?” or laughing out loud hysterically at the events unfolding before me, congratulations, you win.

Asura’s Wrath is an action game, and I’m still not even sure of what kind. The variety in the the sequences was really fun to see. I’m still not 100% sure how well the melee combat is going to work, maybe I’ll get the hang of it with practice, but I really don’t think its going to matter to me personally. The sheer amount of…of…things that I just saw was amazing. It provides a kind of action spectacle that I could watch for hours.

I was on Earth, threw a guy into space, killed him from space while I was on Earth, then later I went to the moon and fought a guy there. And it only got better. That was the most I’ve ever hated a “To Be Continued” screen. Asura’s Wrath comes out next month and I will be there on day one.

I really hope the rest of the game is as good as the 2 chapters I just played. Pleasepleaseplasepleaseplease.