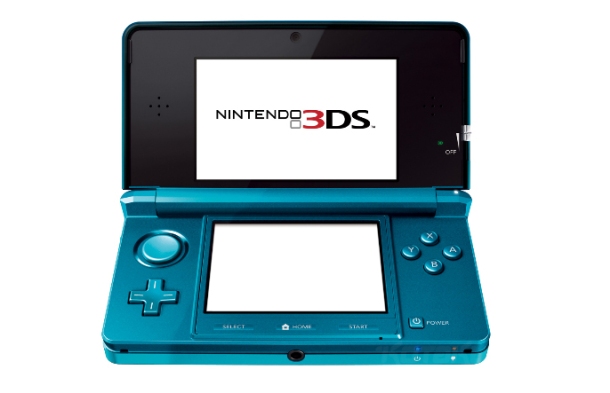 A few weeks before I got my 3DS, I had no intention of buying one. I was satisfied with my iPhone and couldn’t see why I needed another device to carry around with me just to play games because my phone already had plenty of games on it. I kept thinking if I was just done with portable game systems and if I would ever go back. I decided that I was curious enough to see if I had outgrown playing with portables and ended up with my own brand new 3DS.

Since I opened it I don’t think I’ve gone anywhere without it. I love the little blue thing and even I’m surprised by how much joy I get from almost everything about it.

First off before we talk about anything else, it looks really nice. It is small enough to fit in any pocket, and is always a really nice shiny bluish color. Looking back on my old silver DS, I can’t imagine ever hauling it around with me. I usually didn’t take it anywhere.

I love that the 3DS has its own real operating system working inside it at all times. It does more than just play my games, I can visit a home menu and select a bunch of different apps, or even have more games that I’ve downloaded to choose from. Coming from someone that has an iPhone I realize being excited about this may sound silly, but once go back to playing on a system that has buttons, it just feels a lot better. Most of the games on the 3DS are more substantial and worth the extra money you put into them anyway. I’ll gladly pay a little extra for a game to have buttons if it feels better to play it that way.

I love having a device that I just use for having fun with. I use my phone for calling, texting, internet browsing, all sorts of things that I wouldn’t consider the most exciting part of my day. But when I turn on my 3DS I know that I’m getting to play actual video games that have sort of heft to them. I mean a game that doesn’t just feel like a time killer, and something meaningful that you’re putting time into.

I love how the 3DS records what games you’ve played with it and how long you’ve played them. I use the playtime tracking service Raptr to do this with my PC and Xbox games, and its nice to see how much time I’ve been putting into my portables as well. I also think it’s great how quickly you can get started playing a game with the 3DS. My other consoles take a minute or so just to load up to a menu. With my 3DS, I can turn it on and be playing a game in less than 30 seconds.

I love the alternate reality things you can do with the system, like putting pictures of friends’ and family’s faces and blasting them into oblivion as you spin around like a madman. I love the goofy picture effects you can do with the camera, and the 3D pictures are great fun to look at as well. I know smartphones let you have fun with pictures, but everything just seems so much more novel with the 3DS. I can’t really explain it, but everything I do on the thing just seems to be more fun than on my phone. I feel like my iPhone is the grown up waiting for business, and my 3DS is the little kid waiting to have fun and play whenever I’m ready.

I love having a friends list on my portable game system for once, I can see what my friends are playing, what their favorite games are. Having a friends list also shows that Nintendo is finally taking a step into implementing some decent online functionality, and will hopefully expand even further in the future. I love Swapnote, which lets you draw pictures and send them to your friends to see the next time they open the application. I love StreetPass almost more than anything else, because it lets me know that other people are enjoying their 3DS as much as I am. It connects to any other 3DS that you pass by as long as it’s on, and puts the other person’s Mii character onto your system. From there you can send the other person you just met messages, use them in the built-in RPG in the system and unlock new hats for your Mii to show off to people, swap puzzle pieces to create cute puzzles of Nintendo characters, and see what games they’ve been playing recently.

I love having an online store on my DS, and have a ton of games directly inside my system to play whenever I want without having to worry what cartridge I have inside. The store is just getting better and better with great new games being released almost every week. (Mutant Mudds is the bessssstttttt)

I’ve always been a fan of the DS and the games on it, but now I’m a huge fan of the system itself. I really think its the best thing Nintendo has come up with in years. I really hope they support it and keep improving on it. I’ll recommend the device to almost anyone looking for a system that you just want to have a lot of fun with. The 3DS is my favorite handheld I’ve ever owned, and everybody should try it to see if you have the same response as I’ve had. I really love the thing.

One thought on “Why I love my 3DS”