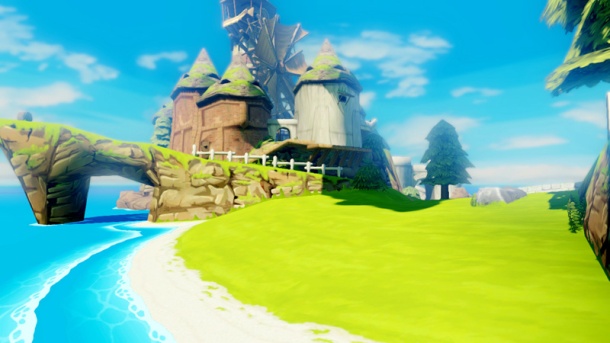 Nintendo has just announced that Zelda: Wind Waker will be coming to Wii U this Fall in a brand new remake. It will have some seriously enhanced graphics, along with new functionality with the Wii U Gamepad. Probably just a spot for the inventory and Tingle Tuner? Yeah, but I still can’t help but get excited for a new way to interact with one of the greatest games ever made. Along with a “tuned up game experience” as described on Direct, and added Miiverse functionality, this could be the best thing that ever happened to anyone, anywhere, ever.

I cannot explain how excited this makes me. Wind Waker is not only my favorite Zelda game, but is my favorite video game of all time. I have played many, many games. This is my favorite one. So…its pretty good. Anyway, this doesn’t look as much as an HD remake as it does a entire graphical overhaul. Seriously, look at it. It’s so beautiful. Come to me baby, come to me right now.

Also announced this morning on Nintendo Direct, a new Zelda game for Wii U coming at some point past this year. I realize that it isn’t news that Nintendo is making a Zelda game for their new console, but what was said alongside it was. Eiji Aonuma, the director who has teamed with Shigeru Miyamoto since Ocarina of Time announced a few interesting things about the next Zelda. He revealed the the mission behind the newest game in development is to “rethink the conventions of Zelda”. By this, he referrs specifically to “completing dungeons in a certain order” and “playing by yourself.” Maybe Nintendo has realized that the unwavering formula of Zelda needs a little sprucing up, and will give us something completely different with the next entry. Whether it works is something we’ll have to see when we get there, but I think the Zelda franchise needs to reinvent itself before it grows stale.

Another biggie, a new Wii U Yoshi game by the Kirby’s Epic Yarn team, Good-Feel! Kirby’s Epic Yarn remains one of the highlights of the Wii’s lifespan, and this will definitely help add to the Wii U’s disappointingly barren game library.

Among the other announcements are a Wii U Shin Megami Tensei and Fire Emblem crossover, a new way to access Miiverse with your phone, the promise of new Wii U Mario Kart and 3D Mario games, a new Virtual Console for the Wii U, and a new game developed by Monolith Soft, the team behind Xenoblade, coming to Wii U soon. Finally, we should be seeing system updates to the Wii U soon to speed up the awful load times.

As much negativity people give the Wii, when Nintendo decides to do something great, they do it right. The Wii wasn’t my go-to system since it’s launch, but when the effort was put into making something unique for it, there was something incredibly special to be had. With Super Mario Galaxy 2, WarioWare Smooth Moves, Super Smash Bros. Brawl, and Kirby’s Epic Yarn being some of my favorite games over the past few years, I’m hopeful that the Wii U will be able to provide a similarly satisfying experience in the years to come. And if not, I’ll always have Wind Waker HD. Forever.