Hey, I bet you’ve never heard of this game.

Coming from Starbreeze studios (The Darkness, The Chronicles of Riddick: Escape from Butcher Bay), Brothers: A Tale of Two Sons is a fairy tale wrapped in some of the most innovating framework any game has seen this year. If you aren’t grinning wide at how charming and new it all feels within the first 15 minutes, I really don’t know what kind of games you’re looking for. Despite feeling like a less emotionally resonant Journey (and really, it’s easy to see what the influences are), it’s more of that style of game, and it’s the most well crafted work Starbreeze has ever produced.

Brothers begins with two siblings heading off on a -ahem- Journey, in order to save their sick father’s life. What begins as an emotionally heavy handed intro about parental misfortune quickly turns into something infinitely more lighthearted. Granted, it doesn’t stay that way for long, but it serves the game well to feel connected to these characters in such a pleasant way so early on..

Heading into the game with basically zero prior knowledge, I had no idea that you controlled two characters, and that the entire game only required four buttons on the entire controller. Each analog stick is the control for one brother, and each is assigned one trigger which acts as a catch all for any action they will take throughout the game. It was an entirely revelatory moment that I rarely have in games. How often does a game, within the first second of gameplay, introduce a mechanic that’s entirely unheard of in modern game design?

By controller two characters with unique personalities throughout the whole game, you’re given a multitude of opportunities to experiment with them. In beginning town, each brother can perform a single unique action with every villager. On pressing the older brother’s trigger while next to the old lady, he’ll pull out the map and ask for directions. Have the younger brother perform his action with the same lady, and he’ll grab her rocking chair and sway it back and forth to her amusement. Each brother has such a unique personality, half of the game is seeing what actions they’ll take with every single person/object in the game, and it’s all entirely optional. You can easily choose to skip out on all of the well crafted animations and tiny bits of character development, but if you’re into that, I think you’re already playing the wrong game.

Controlling two characters simultaneously for an entire game might seem like an exhausting task, but luckily there is never any more dexterity required of you than what you’re capable of. Tasks remain relatively simple, yet satisfying, throughout, and the most exhilarating parts of the game are still accomplished by slightly moving each analog stick and holding down a trigger. It’s not tough, and the game eases you into the scheme so well that even though you may not master it by the end, you’ll feel like you played your part well. The puzzles are well suited to the controls as well. Solving puzzles by yourself by controlling a team leads to some really interesting situations, and the solutions are just as satisfying to come up with as they are execute, even with the simplistic “boss” encounters. One specific fight, however, feels a little too reminiscent of Limbo for its own good, and is a little disappointing for how original the other 99% of the game is. 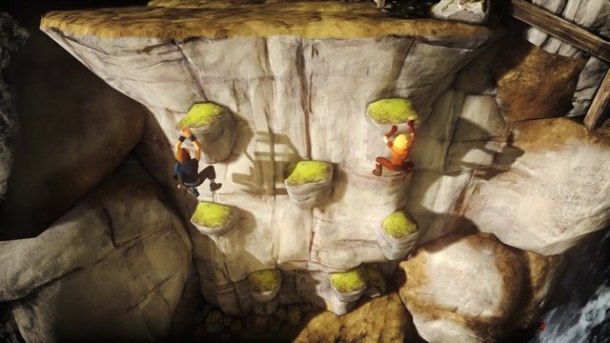 The game’s striking attention to detail is its strongest point. While the globe-spanning places the Brothers go are intensely gorgeous, it’s the little things that remain the most memorable. At one point in the game, a friendly fowl meets its end, and a feather is left on the ground next to it. To my surprise, I was able to instruct the little brother to pick up the feather and carry it with me. A moment later I found the two crossing over a bridge high up in the sky. I released the right trigger, and the boy let the feather fly off the bridge, and I watched it dance across the sky, as some kind of final memorial for a fallen ally. It was one of the most memorable moments from anything I’ve played this year, and the game allowed me to do it. I didn’t get an achievement, there was no bonus dialogue, it didn’t change the story- but it meant something to me.

Brothers takes the pair across a huge fantasy world filled with a variety of beautiful environments and imaginative creatures. Without spoiling too much, figuring out how to scale a massive castle with only a small rope was probably the most brilliant, rewarding part of the game. Spanning an entire world, the pacing always feel meticulous, and you’re never in one place for too long. The short length of the game keeps everything moving at just the right speed, in a bigger budget game, each area would probably be twice the length.

However, the short running time, about 3 hours, was one of the only problems I had with Brothers. As the grand adventure winds down to a close, the game pulls some emotional punches that would have worked better had you gotten to know the characters more over a slightly longer game. Even if it were another couple hours, if the level of creativity had stayed intact, I believe it would have made for a more complete experience. Though I appreciated the attempts made with the ending, it didn’t strike me half as hard as say, Journey. Journey is designed to be a shorter experience, and feels indescribably rewarding. Brothers almost feels rushed in its final half hour, leaving what could have been a easy candidate for Game of the Year to feel slightly underwhelming in its conclusion.

Brothers may not be a perfect game, but it has more innovation in three hours than most games do in twenty. If you’re up for a game with an almost perfect blend of Journey, a little Limbo, and the atmosphere of a Team Ico game, you’re in luck.

Brothers: A Tale of Two Sons is currently available to download from the Xbox Live Marketplace for $15, will be coming to PC on August 28, and PSN on September 3.

One thought on “Brothers: A Tale of Two Sons review – Of a Feather”