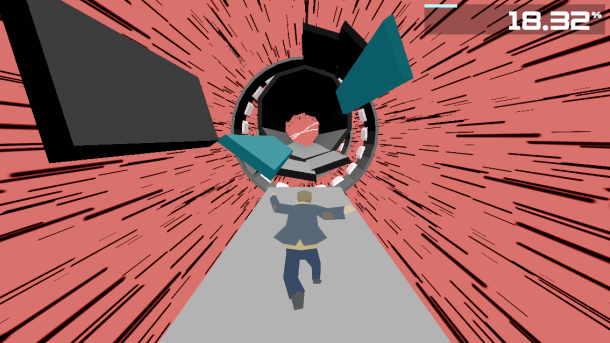 Boson X is about thinking on your feet. Timing is everything, and one slip up will have you falling into oblivion, but more than ready to try again. In a mix up of Super Hexagon meets Dyad, Boson X is about a scientist’s subatomic sprint.

In his quest to generate speed in a massive particle accelerator, our little scientist runs through an ever changing tunnel, and the environments constantly form around you. Where in Super Hexagon your view is only hindered by the 2 dimensions in which you see the screen, in Boson X you see the obstacles being created in the distance, and are given a very short time to react to them.

It’s a three button game, jump forward, jump left, or jump right. It’s a more aesthetically pleasing and more enjoyable Temple Run, worried less about collectables and more about constant observance and a quick reaction time. Every jump spins the platforms around you, so you’re always placed directly on the bottom of the screen, not flying all over the walls. Some platforms flash to warn of a fall when touched, and others are necessary to run along to build up speed to gain more stages and increase high scores.

Each stage has a unique track to accompany it, which goes a long way in making it more fun to try different stages each time. Each stage also has a different theme of what obstacles are used, how they come at you, as well as different color schemes. Boson X mixes it up so well that as soon as you’re tired of one stage, it’s incredibly simple to switch to another and feel like you’re playing something quite different.

Boson X will keep you hooked if you’re a fan of chasing the top spots on leaderboards, but even if you aren’t, racing through to unlock the six stages is enjoyable enough on its own. It’s not a difficult game to understand, just a tough one to master. And as with many games of this type, Boson X a great thing to be able to pick up again and again.

Boson X is available as a free download for PC, Mac, and Linux, and can be purchased as an app on iPhone, iPad, and iPod touch for $2.