Quantic Dream has a talent for crafting moments. The scene in Heavy Rain where (SPOILER for a nearly four year-old game but whatevs) you chop your finger off is one of the most memorable things I’ve done this console generation. Forget about the plot holes and the French accents, when I walked into that room, I was completely drawn in.

Beyond: Two Souls is, again, a game that may not be filled with the most brilliant writing of the generation, and the story may not hit the right notes at every turn, but there are moments that are really something special, and they’re worth seeing the whole thing through.

Beyond begins with its main character Jodie as a small girl. Or wait, maybe she was in the military when it started. Oh, wait, maybe it starts when she was an angsty teenager? The plot of Beyond skips so frequently between periods in Jodie’s existence, it’s quite difficult to actually remember who and where and why Jodie is where she is at any given time.

Jodie is played quite well by Ellen Page, and the other star, Willem Dafoe, also does some great work here. Almost all of the performances in the game are well executed, even when some of the writing isn’t. Even Jodie’s ghostly counterpart, Aiden, shows some character through the course of the game, even though you never the spirit onscreen.

You control Jodie to walk and interact with people and objects throughout the game, but Aiden is also controllable at most times as well. By pressing a triangle button, you assume control of him, and can fly around through objects and can interact with whatever the game allows you to. Possessing the form of a ghastly spirit hasn’t ever been done as well as it is in Beyond, and the power fantasy of being an invisible being of infinite power is realized to nearly its full potential. But having two characters to control can be cumbersome, as getting lost in the game isn’t as hard as you’d like. It’s easy to feel like you’re playing a point and click adventure, walking around and clicking on everything to see what will advance the story, and it’s twice as bad having to do it from the perspective of both characters to see what works. It isn’t a constant issue, but it’s one that rears its ugly head more than a few times throughout. The action icon is almost always a tiny white dot as well, which can be hard to spot, and only appears when you’re standing in the correct position next to an interactable object.

The game is played one stage at a time of Jodie’s life, albeit not sequential. Complete the section and you’re sent to a loading screen to load up the next one. They very rarely have anything to do with the event preceding it, and jumping from adult to child to teenager can interrupt the pacing of the story quite a bit. The haphazard story beats feel disorienting at first, and eventually work their way into something more cohesive. I’m sure this was done for the sake of variety, but it honestly feels like 90% of these were randomly thrown at me throughout my playthrough. Only toward the end of the game do events and flashbacks happen in a discernable sequence, and by then I had pieced much of my earlier confusions into something more fluid.

The scenes you play through vary wildly in length. Some lasting multiple hours, some less than two minutes. The best parts of the game last around 20-40 minutes, and involve a mess of decisions that can lead to many unique outcomes. These in particular were the events I returned to after their completion, just to see what other events could take place in reaction to my choices. In one sequence, a certain choice will lead to a relatively anticlimactic ending. Upon replaying it, I press a button sequence a bit more quickly, and it lead to an entirely different outcome, resulting in one of the more memorable parts of the game. These are where the game shine, and most resemble its predecessor, Heavy Rain. Interacting with the characters and seeing how much variation the levels can have is one of the most rewarding parts of the game, and are what saves it from some of the stages’ mundanity.

Every level, however, does not share the short, sweet enjoyable narrative as the aforementioned ones. Out of the roughly 30 segments total, there are a handful that last at least an hour each, and have bits heavily centered on action. Being a “game” is not Beyond’s strong suit. Running, jumping, dodging, and fighting at quick speeds just isn’t that fun or reliable. All of these are essentially quick time events without a button prompt telling you what to hit. It seems like a good idea, but my reactions eventually became quick guesses as what to press, because it can be hard to figure out what you’re supposed to do. There is rarely any punishment for missing the actions anyway, so failing them never had any real consequence, other than Jodie tripping or taking an extra punch during a fight.

With as gorgeous and realized as the world of the game is, small mistakes in detail take a lot away from the believability of the game’s world. This early scenario left me scratching my head: Young Jodie goes outside to play, her mom watching from the window. Jodie decides to sneak away to play with kids in the street, mentioning that her mother wouldn’t notice her departure from the front yard. Jodie navigates a hole in the fence to the street, and you can clearly see that her mother could obviously still have line-of-sight to Jodie. I mean, she’s within shouting distance and she can directly still see her from the window, and the game pretends that she might as well be across the planet without a clue what happened to Jodie. 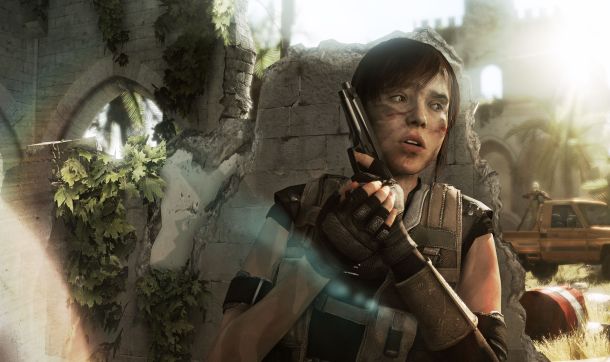 One more example, plenty of scenes involve some dramatic moments, moments in which someone might pick up their pace if they were involved in them. There are multiple occasions in Beyond where it is impossible to increase the pace of how fast the character is moving, even when someone’s life is potentially on the line. You slowly control the character to wherever you’re going, sometimes they’ll break into a light, dismissive jog, and you arrive. The part that kills me, is that, upon arrival, sometimes the character will burst into the cutscene as if they’re finishing a 5k. Jodie, you were clearly not interested in moving very quickly, and suddenly you’re bursting onto the scene with actual enthusiasm. It makes the actual gameplay feel quite distant from what’s going on in the cutscenes sometimes, and occasionally made me wonder, “Most of this could have probably been better as a movie.”

Between the action sequences, meeting the characters, fucking people up as a malevolent spirit, and learning about Jodie’s adventures, I played through the game in about 4 sittings. The entire thing lasted less than 9 hours. But for as many problems as the Beyond has, I could have spent a lot more time there. Plenty of moments are actually intensely emotionally resonant and feel incredibly heartfelt. For every moment where I cringed at how dumb it was that I had to walk around a desert looking for spooky ghost mystery clues, there was a moment where Jodie used her power to connect with another person in a way that felt really genuine. Some of the plot is silly, but a lot of it will resonate if you give it a chance to. I look forward to seeing some of the scenes again just because of how well they were acted and written. The scenes that do go above and (ahem) beyond, are what transcend the game from a mess of ideas into something more meaningful.

Beyond isn’t incredibly long, not all of it’s perfect, and it’s occasionally way too heavy handed for it’s own good. But it tries things that other games don’t, and it ends up doing a damn fine job at trying something very, very different.