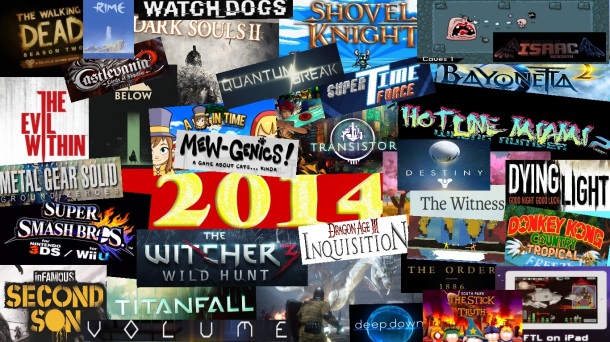 Once again, it’s time for some looking back. Each year I make a prediction about what my Game of the Year list might look like as the year closes, and this last one was a doozy. Not only is it completely off base as usual, but most of the games that ended up being my favorites weren’t even on my radar. Here’s what my predictions looked like at the start of 2013:

So, BioShock Infinite ended up not even cracking the top 10. The only two on here that actually showed up were The Last of Us and Antichamber, and they’re both not quite near where I had expected them to be. BioShock, Metal Gear, and Dead Space all ended up being awesome games this year, but just not as awesome as some of the other stuff I ended up with. The Witness still looks great, but it didn’t make it out this year, and Bayonetta 2 is scheduled for 2014 as well. Beyond was a hot mess, both good and bad, and Tomb Raider didn’t really grab me, even though I ended up finishing it. Rayman Legends was more of Rayman Origins, which is fine but not what I’m after in a platformer, and I didn’t get to play as much Pikmin 3 as I wanted, but it seemed pretty neat.

Pokemon X and Y were announced in January, Zelda was announced in April, and Mario was announced in June. Three of my favorite games of the year weren’t even announced the year before, and ended up blowing me away. Most of the others were complete surprises that came out of nowhere, and I lucked into playing. Stumbling across fan-made MegaMan Unlimited was one of my luckiest finds of the year, and I’m sure there are still plenty of people who would love it, but don’t even know it exists. I had a ton of fun with multiplayer this year, with Stickman Golf and EGGNOGG always proving fun with a group of friends, and playing Pokemon online was fun from anywhere. I championed Kentucky Route Zero and Antichamber from the first couple months of the year, and I was so excited that Antichamber actually turned out as cool as it looked when I first saw it. The Last of Us was excellent, but a few too many pacing and gameplay issues stopped it from climbing any higher in the tanks. As always, there was a ton of stuff to play this year, and there are tons that didn’t make the top 10 (or even the top 19!) that I can’t wait to play through again when I get a chance. With most big budget games holding off until after the new consoles release, 2013 was the year of the smaller, less technically advanced game, but still a year with dozens of excellent titles all year long.

As always, here’s a list of 10 games that might (but probably won’t) make up my Top 10 of 2014. I have a huge list sitting in front of me right now, and if even a third of this turns out well it’s going to be a pretty sweet year.

#1. Dark Souls II
#2. Shovel Knight
#3. Titanfall
#4. Super Smash Bros. U
#5. The Walking Dead Season 2
#6. Bayonetta 2
#7. The Witness
#8. Hotline Miami 2
#9. The Evil Within
#10. Transistor
(#11. A Hat in Time)
(January 14 Update – I wasn’t going to put the Binding of Isaac remake on here, but after Edmund’s post today, I remembered just how huge of thing it’s going to be. Completely redone art style, tons of new characters and enemies, almost double the number of items, not running in Flash, etc. I predict that The Binding of Isaac Rebirth will rank really highly on my end of year list, and it’s essentially a sequel to the original, which is one my favorite games of all time. Let’s say #3.)

Bear in mind that I’ve not put a ton of thought into that list, and that’s just what I know of that I’m most excited about. Most of the big stuff coming next year I’ve been waiting to see more of before I get too invested, but a lot of it is already looking really, really cool. Going into 2014, I’m in the best position I’ve ever been in to be surprised. I’ve been paying so much attention to the smaller guys through 2013, I plan on letting myself be surprised with whatever AAA developer decide to throw at me. Will Watch Dogs actually be cool? WHO KNOWS? Here’s an additional list of some stuff I’m super excited to see more of, but still think it’s too early for me to judge where they’d land on next year’s list. These are here either because I haven’t payed close enough attention to them, or just because there’s just not much out there about it yet (as in: little to no gameplay footage.) The thing I’m most excited about right now is probably Fallout 4, but who knows if that’ll actually come out this year or not. If it gets announced, go ahead and shoot it straight to #1.

Just like every other year before, I expect a lot of this to surprised me, and a some of it to disappoint. The most exciting part about jumping into a new year is waiting for everything to start coming out leading up to the insanity of March, and seeing what ends up being great. Having a game come out and blindside me is one of my favorite parts of every year, and who knows what it’ll happen with in 2014.