Since 2003’s The Wind Waker, no Zelda game has given me the sense of freedom I want from the series. Twilight Princess is bogged down with boring fetch quests (literally, because you’re a dog), Skyward Sword has the worst travel system and the most boring filler of any of them, and the DS games just aren’t up to par with even the other handheld games. They’ve all had great parts, I enjoyed a lot of Twilight Princess and Skyward Sword, despite having to force my way through the terribleness. But, what if, Nintendo made a new Zelda game without any of the garbage that comes with them?

A Link Between Worlds is the best Zelda game since Wind Waker, and is one of the best games the franchise has ever seen. The pacing is nearly perfect, with dungeons being smaller and self-contained, and the world(s) still as open as ever. The most disappointing part of the newest Zelda is how quickly it feels like it ends, but if every Zelda game could be this good with all the filler stripped out, I’d take this kind of game every time. The dungeons are great, boss fights are memorable, and puzzles are worth taking the time to solve, and that’s what we’re really looking for in these games, right?. Immediately after I finished it, I started it over on the harder difficulty and have nearly played through the whole thing again. On my second playthrough, I’m still finding new secrets that I’d never seen before, even after spending probably 25 hours with it. 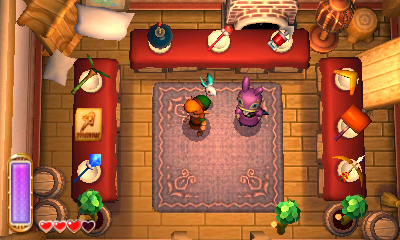 There’s so much to see, and it’s almost all open for you to find right from the beginning. There’s no handholding, there’s no two hour introductory sequence/tutorial, there’s no partner who yells at you when you’ve been exploring for too long. The game opens, and about 10 minutes later you have a sword and a huge map to roam around. Items aren’t doled out at the regular Zelda pacing either, as the majority of them can be attained at the very beginning of the game. The bow, hookshot, bombs, etc, can be “rented” for a fee from the town’s resident eccentric shopkeep, but are lost as soon as you die. Eventually you can gain enough money to purchase them and own them forever, which actually makes the Rupees feel super important in a series that throws them at you like candy. The items can then be further upgraded by finding tiny squid creatures hidden cleverly throughout the world, meaning all of your exploration is constantly helping you improve. There’s always a new mini game to find, a hidden treasure room to tackle, an upgrade, a new item, a secret behind a waterfall, or something even better.

A Link Between Worlds plays expectations and nostalgia in a masterstroke, never feeling too familiar to be unexciting but always reminding you of how the best Zeldas used to be. It’s a bold step in the rightest direction they could have gone, and it’s a beacon of hope that the series won’t just become a legend from the days of old. If for some reason you still don’t have a 3DS, this (on top of a dozen other great games from 2013) is a reason to pick one up. Even as a handheld game, it’s one of the best looking, fastest moving Zeldas I’ve had the pleasure of playing. How awesome is cutting bushes at 60 frames per second? Very.

I’ve had a soft spot for Zelda games since I picked up Link to the Past so many years ago, and I’m glad that there’s a new one that I didn’t have to suffer through. All of A Link Between Worlds is “the good part” and it hopefully represents Nintendo’s plans for the future. Can we just imagine, for a second, that this isn’t a fluke, and that the Wii U Zelda will be this good? There’s so many parts of this game that are worth discussing, and I’m stunned that it turned out to be one of the best Zelda games I’ve ever played. If nothing else, A Link Between Worlds is the best Zelda in 10 years, and is the game I’ll be taking with me way past 2013. Bring on Zelda U!