Games still keep coming fast, and the next few weeks will continue to be just as busy with Assassin’s Creed, Dragon Age, Far Cry 4, and too much more to remember. I’ve been picking favorites out of the bunch of new releases, and still always coming back to Hearthstone and Fantasy Life. I’ve actually finished some games for once, which is a relief when you’re trying to get hands on with everything.

The new Call of Duty is great, and has already gotten the taste of Ghosts out of my mouth.

I’m a Call of Duty apologist. I know they’re pretty similar every year, but I love picking each of them up day one. There’s something about that big November blockbuster than I can’t stray from, but after Ghosts I thought they’d lost me for good. Advanced Warfare brings me back in, and I’m glad they got back on track. With robot armor, grenade arm cannons, and jetpacks, a comparison to Titanfall wouldn’t be too far off. But it’s a big change for Call of Duty, and unlike Titanfall, it has a lot more content than just a few multiplayer maps. Movement just feels good, and sprint-jetting across a map with air boosts and double jumps is really satisfying, especially when you’re tracking down an enemy to deliver a surprise blast from the sky.

I finished The Evil Within, and I think the first half is way better than the last.

I still think it’s a great game, but some of the more action oriented battles towards the end just drained me. Not everything worked that well (I’m looking at you, machine gun zombies and lake creatures), but it was a fun ride while it lasted. The story still never tried to make any sense, but that wasn’t what I was there for anyway. I walked away still impressed, but knowing that it could have been better. A slightly worse Resident Evil 4 is still pretty damn good.

I also finished Bayonetta 2, and I think I liked the first game more.

The first Bayonetta took me by surprise. I couldn’t believe I was running along monsters the size of the screen, and kicking people into the sun. It was gleeful in showing you the craziest stuff it could think of. The second game is more of that. Do I still want to see giant hair beasts chomp on giant angels with faces on their swords? Yes, I do, but I feel like I’ve seen it all before. I also think the first game had better bosses, but it could just be the nostalgia of playing it five years ago. Either way, Bayonetta 2 continues in the footsteps of the best action game ever made, and there are a lot worse places to be.

Fantasy Life still has its hooks in me. 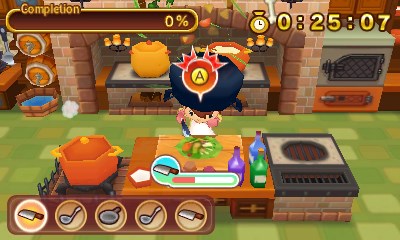 Whenever I have the chance to play a quick portable game, I’ve been plugging my minutes into Fantasy Life. It’s so constantly rewarding, and I can’t stop playing it. The tasks you do aren’t much more than fetch quests, and I realize I’m essentially playing a single player MMO, but hey, I like MMOs. I’m always leveling up different skills, finding new monsters and items, and learning new ways to play. I feel like there’s always something new to do, and I want to see it all. I’ve barely scratched the surface 10 hours in, and I can see myself playing it for a long time.

I’ve only played about 4 runs of The Binding of Isaac: Rebirth, but it’s just what I wanted it to be: more of an already amazing game.

I’m jealous of how interesting and smart The Binding of Isaac is. It’s infinitely replayable because of how complex its item an enemy systems are, but so simple that anyone can pick it up and play a round, and not be utterly unable to play. It’s the best roguelike ever, and an improved version of one of my favorite games. I’m still warming up to the new music and sound effects, but it seems like Nicalis has hit another home-run.