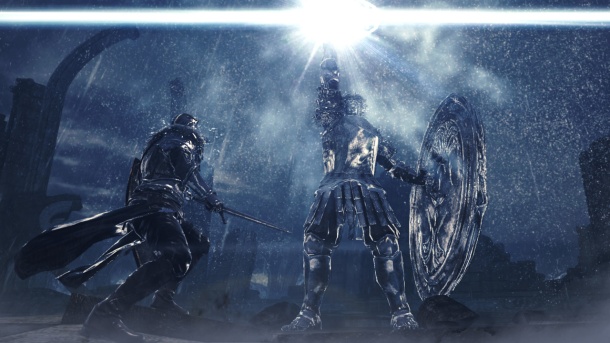 The original Dark Souls might be the best game I’ve ever played. Dark Souls 2 does everything it can to match the feelings I had playing its predecessor, and while it’s not exactly the same, I think I like it just as much. I can’t say that Dark Souls 2 is the “better” game, but I had a hell of a lot of fun spending 100 hours with it in 2014.

Dark Souls 2 has gotten a lot of hate for not being identical to Dark Souls. No, the spokes don’t wrap around into each other, and it makes the game feel a lot less woven together. I’m the first to admit that the lore doesn’t stack up to what the first game presented. Dark Souls 2 has some issues, but the things it does right are done so right, I can’t call it anything other than one of my favorite games of the year.

There are tons of bosses, a huge variety of areas to explore, and still some of the most satisfying combat in video games. There is so much content in Dark Souls 2, and nearly every bit of it is worth hunting down. I love wandering through the huge areas to look for secrets, and to learn more about world I’m traveling through. I’ve spent many hours in 2014 seeking out information on Dark Souls 2, listening to the excellent Bonfireside Chat podcast, and reading forums to see other people’s speculations on the story.

Dark Souls 2 is just a fantastic game to lose yourself in. It’s an easier point of entry for newcomers than the other Souls games, while still providing the challenge for experienced Hollows. I love the Souls series, and Dark Souls 2 gave me even more than I thought I wanted in a sequel, by giving more content than I ever expected. 60 hours in and I was still finding brand new areas that I didn’t know existed.