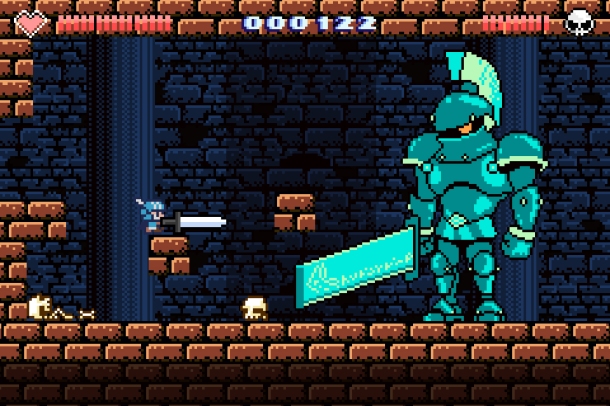 If you’ve noticed any themes on this site over the years, you’re probably aware that I love platformers, and that I’m bummed when awesome little games don’t get the attention they deserve. Between both of those, I believe I’m morally obligated to tell you to go buy Castle in the Darkness right now. Go. It’s just six dollars. Did you buy it yet? Okay good.

Castle in the Darkness is in the running for “Most Mibibli’s Quest Game of 2015″ which is to say, “Best Game of the Year That Nobody Hears About.” Matt Kap (of 1001 Spikes and Isaac: Rebirth) has set off on his own to make something very special.

If you’ve ever had any appreciation for

you should check out Castle in the Darkness. 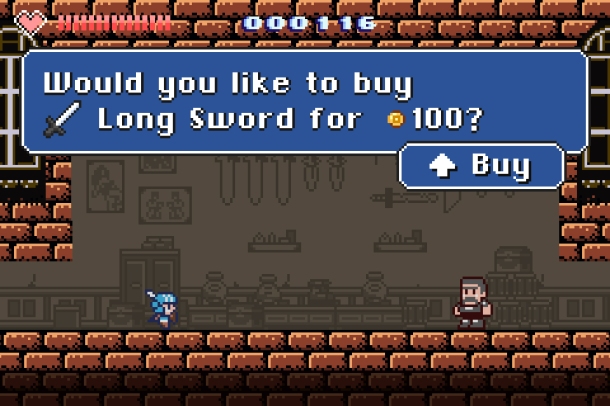 Castle in the Darkness starts off simply enough: You’re a little guy in a village with a sword. You’ll stab a few skeletons and do battle with some nicely drawn, but easy, bosses. The game does not stop there. It doesn’t take long before the world opens up, and you’re discovering secret areas and items around every turn.

It brought back my favorite feeling of Dark Souls 2: seemingly infinite possibilities. Every time I would go down a path, it would lead to me unlocking another area to explore somewhere else on the map. At one point, I had four different bosses I could tackle in different places, and explored my way around until I was strong enough to take down one of those road blocks. There’s also a bonfire-like system, in which you can only save, change gear, or even pause the game at save points spread strategically across the world. Some areas become gauntlets to survive and master, just long enough to hit the next save point and start the process over again. 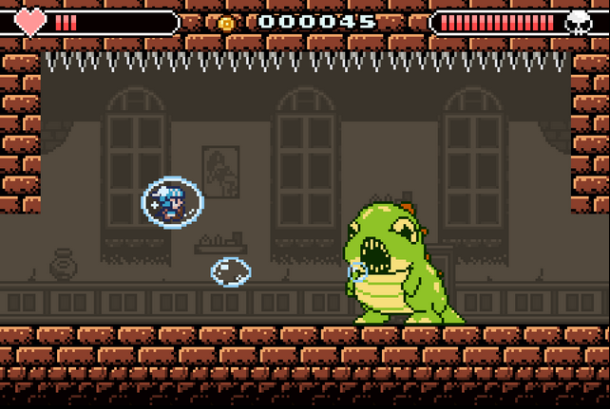 You’ll definitely hit road blocks if you aren’t exploring enough, because parts of the game can get really tough without any notice. You may breeze along through a castle until you stumble across a boss who has way more health than you’re equipped to deal with. Can you struggle against him and spend 30 minutes whittling his health down to nothing? Probably, but the better option is to explore the dense map and figure out another way to go. Whenever you think you’re done finding alternate exits and character upgrades, you’re probably not. With a whopping number of bosses and hidden places to sniff out, Castle in the Darkness is a huge amount of game for a measly asking price of $6. By hour 10 or so, I felt bad for paying so little.

The game’s main issue is the lack of a map. The game is huge, and doesn’t contain any map to mark your progress through it, as you might expect from the genre. It’s up to you to piece together which areas connect where, and that’s tough with a game as big as this can feel at times. I just feel a few additions, like a map and a couple extra warp points, could help alleviate a few too many instances of wandering. It’s a tough game, and going through some of the areas multiple times just to figure out where to go next can be a bit more time-consuming than you’d like. The game also has a few frame rate issues that only pop up in a handful of the hundreds of screens, but are extremely noticeable nonetheless. A couple bosses slow the game down to molasses-speeds, and hamper fights that could have been much more enjoyable otherwise. Hopefully, in the promised content updates, we’ll see a map added in the future, as well as improved speeds during the hitches. 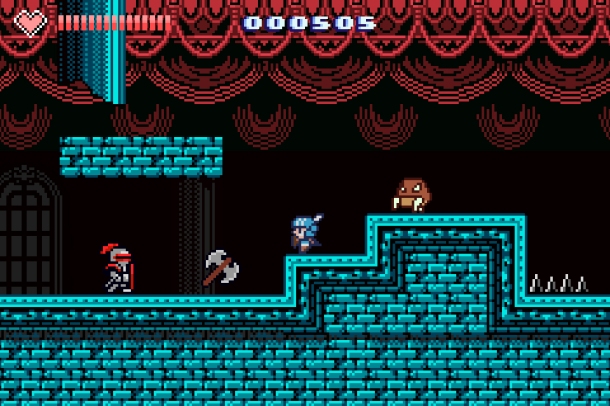 Castle in the Darkness is Metroidvania at its finest, and brought back memories of playing through Symphony of the Night for the first time. It knows where its inspirations lie, as you’ll encounter dozens of references to past games throughout the dozen or so hours you’ll put into it. Castle in the Darkness loves to remind us why we love playing old games, without succumbing to their weaknesses.

As the credits roll and you see Matt Kap’s name repeated in every part of the game’s design, you’ll be even more impressed that a feat this big could be pulled off with a team so small.