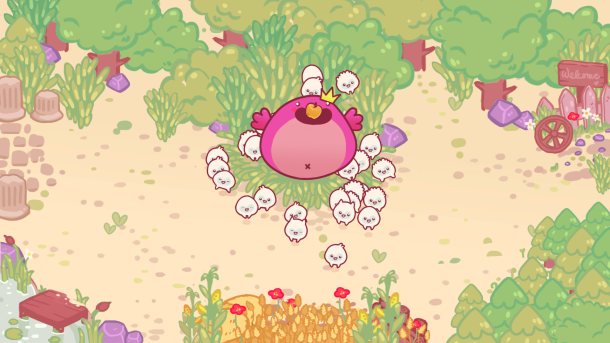 You like things like Cookie Clicker and Candy Box, right? You know how this works, click a thing here, a thing there, upgrade the things you’re clicking on to get more things to click on, etc. Princess Nom Nom is that, except way cuter.

Princess Nom Nom features an insatiable princess with loyal subjects ready to gather a bewildering amount of grub. You send the minions into a forest to hunt for fruit, and once the royalty’s eaten enough you can start your upgrade path.

There’s always one upgrade just out of reach, and there’s enough of them to keep the game engaging through its entire (but brief) run-time. You’re constantly clicking on something, sending minions on food runs, upgrading speed, popping more minions out and eating, eating, eating.

Side note: Why does feeding the princess allow her to spawn new living creatures? Is food somehow tied to the Nom Nom reproductive system? Where exactly are they coming from? At least the little guys seem happy.

Princess Nom Nom may be all about getting big, but it’s an idle game on a scale that’s much easier to swallow. Being made in just 48 hours by four people, it avoids becoming the time sink that’s expected of the genre. After less than half an hour of feeding time, you’ll have most likely reached the end. The game is so easy on the eyes (those colors!) and ears (that bouncy soundtrack!) it could have lulled me into clicking for much longer, but it gracefully pushes you away for your own good.

If you’re ready to spend the next twenty minutes with a ravenous ruler, check out Princess Nom Nom on Armel Gibson’s itch.io page.

(Endgame spoiler: If you really want to keep playing, don’t buy the 10,000 food upgrade! It immediately ends the game and erases your progress.)