Game of the Year / Games / Nintendo

Just go listen to that.

Why are you still here. 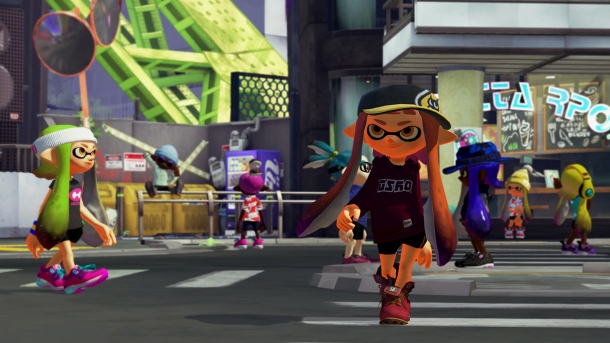 Splatoon is a magical thing. After slowly burning out on Call of Duty and Battlefield little by little every year, and especially after The Great Titanfall Lapse of 2014, I kind of thought my online shooter crave was dying out for good. But, nah, it’s just because nobody was making stuff as cool as they should have.

In Splatoon, you and a bunch of pals run around gunning down halls with gobs of paint. Since the main objective is to attack the environment rather than other players, Splatoon totally subverts the traditional online shooter. Yeah, you can shoot an enemy player, but what you’re really after is the enemy players’ turf. The opponents themselves are just collateral damage.

On top of that, the whole game is filled to the brim with Nintendo personality and styyyyyle. There’s an Animal Crossing-like focus on wearing the “freshest” clothes. Other player’s Miiverse posts fill up the main plaza, and checking up on what everyone’s talking about is a huge draw of being part of that community. It just feels…nice. Like all of the first-party Wii U masterpieces, really.

Oh yeah, there’s also a super rad single player mode that feels like a mix between Ratchet and Clank and Super Mario Galaxy. Filled with inventive level designs and enemy fights, with some awesome bosses topping each of the worlds off. Not all of the actual visual designs are enough to write home about, (they’re mostly just empty construction sites) but what is there is more than I was expecting. I didn’t even know the game had a single player mode until I started blasting through a half-dozen levels in the minutes after finding it.

It’s the first brand new thing from Nintendo in a while that actually feels like it sticks the landing. It’s new, it’s cool, and I’m ready to see how they can evolve the idea in the future. With how inventive Splatoon is on its first outing, and knowing Nintendo’s track record, I have a feeling they’ll make sure it stays fresh for a while to come.