I’m out of bullets. He’s looking me dead in the eyes, and I’m about a half-second from a bullet flying right between them. It’s time for decisive action. I leap to the side as his bullet whizzes straight past me, right into the torso of his buddy at my six. Thanks, guy. The empty shotgun I heave in his direction sends him reeling backwards, and forces his gun into the air. I catch the gun before he’s even caught his breath, and send his last bullet soaring straight through his now shattered figure.

If you haven’t guessed, SUPERHOT is a Coolest Human In The World Simulator, and it’s one of the best uses of my video game time I’ve come across in a long while. As you’ve heard in every piece of media that exists about this game “Time moves only when you move.”

Remember that part in The Matrix? Yeah, basically like that.

As long as you’re moving in any direction, the game world progresses just like anything else. Cars roll along, enemies run for cover, and the occasional bullet flies at you, ready to send you to your next game over. But as soon as you stand still, all of that just…stops. Or at least, slows to a crawl. That bullet heading right at your face may take a couple of minutes to make it to you, as long as you stay put. Maybe you have enough time to jump out of the way. Maybe you can leap over it in slow-motion? Maybe you can CUT THE FUCKING BULLET IN HALF WITH YOUR GODDAMN KATANA.

Do you get it yet

Imagine any movie’s action setpiece and you’ll probably get to play it in SUPERHOT. Kicking a dude in front of a train. A bartender raising his trusty shotgun before a brawl. Jumping over a speeding car. Being locked in a deathmatch cage. About thirty other levels worth of legitimately exciting stuff.

Remember how sweet it was to pull of cool moves in Hotline Miami? Just picture all of that happening in first-person and also in slow motion. Okay great you’re done here just go play SUPERHOT. 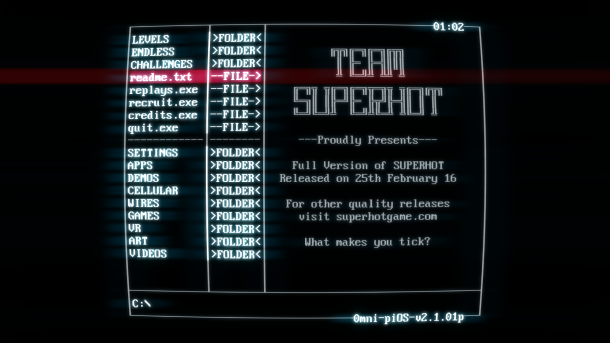 If the action isn’t enough to satisfy you, you’ll be pleased to hear about the trappings around the game’s immaculate sense of style. It’s all very meta “it’s a game inside a game, but also it’s real life…maybe!” The story is interesting enough, doesn’t get in the way too much, and provides about as much narrative as something like this needs. There’s a ton of optional stuff to do too, the best of which take the form of secrets hidden inside nearly every level of the game.

On my first playthrough (which took about 2 hours) I ran around and killed a bunch of people until there were no more people to kill. It was great. But there’s a point where you’ll realize that the levels are hiding a lot of things right in front of you, if you’re willing to stop Matrixing up fools for five minutes. Almost every level in the game has a cleverly hidden platforming challenge leading to hidden areas, and it’s almost as satisfying to figure them out as it is to solve the game’s combat puzzles. It also makes the game feel even more like Mirror’s Edge, beyond the stark visual presentation. It’s awesome. One level has a secret Ferris wheel on a roof! Yeah!

It’s hard not to talk about SUPERHOT and just say “This game so fucking cool oh my god” but that’s almost all it needs. This is a very smartly designed and well executed thing, and it’s incredible to see just how much the game and SUPERHOT Team have grown since the prototype (made in ONE week back in 2013.)

I’m not sure who the person is that looks at SUPERHOT and says “nah, that’s not for me.” but I feel bad for them that they can’t experience human emotions anymore. That’s gotta suck.

If you’re up for being a time bending action hero for a few hours, check out SUPERHOT here.

Did I mention that SUPERHOT is great