Still keeping it pretty strong, 2016! It feels like every week I’m being bombarded with some good stuff to play. Even that Twilight Princess remake is prety good, now that the dust has settled on that one a little bit. I’ve gotten deeper into Street Fighter than I ever had before, and I now understand why people like Harvest Moon. And I said “Super. Hot.” a lot out loud to myself when no one was around. Not bad, not bad. Oh, and The Witness’ endgame is nuts I’ll probably never finish it. It was fun while it lasted.

I’ve said about all I have to say about SUPERHOT here, but I still really think you should try it out. I expect it to end up fighting for a top 10 spot at the end of the year along with The Witness, as long as it stays with me the way I feel it might. I keep coming back to it and finishing off new challenges, showing friends new levels, and just seeing what all that game still has for me to see. The first couple hours isn’t even close to all SUPERHOT has to say. Well, all it really needs to say is “Super. Hot. Super. Hot.” and I’m already sold. 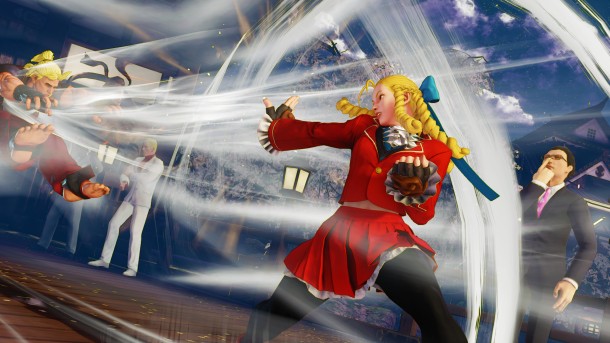 I really like goofing around with fighting games like Mortal Kombat and Injustice, but the aesthetics of Street Fighter really hit me in a way those games don’t. It’s bright and fun, and cares more about having characters with silly poses than how good their insides look when they fall out. This is my first Street Fighter that I’m actually trying to actually be good at, rather than being “guy who smashes buttons and accidentally wins one of every ten matches.” It’s going okay so far! My local co-op matches with friends of similar skill levels have been very fun, and having this to bust out with groups is another tick on the “PS4 is a party game machine” train.
It is, as of the time of this post, still barely a full game right now. Half of the menu options don’t work, and there’s little more to do than some solid Street Fighting with other people in the room. Even still, I’ve had more fun with this than most games this year, and any content additions are just going to make this cool thing cooler.

I should have probably played Harvest Moon a long time ago. I’m told Stardew Valley is just Harvest Moon with some light Animal Crossing elements, and it sure is nice. I’ve been fascinated with the series since I read about it in a Nintendo Power back in elementary school, but I’ve never actually had access to one, or been curious enough to seek one out. I’m enjoying it for a lot of the same reason as Animal Crossing…upgrading my equipment to do tasks easier, collecting items and fish and stuff…remodeling my house and my land, but there seem to be a lot more complex systems in play that I’m just beginning to learn about. It’s neat and cute, and I plan on sticking with it.

The Walking Dead: Michonne – I can’t believe it’s worth playing! I’m about an hour in and I can’t wait to finish it. I know very little about Michonne or the events of the TV show, but this is a good Telltale Walking Dead game, and that’s all I need to know.

Digimon Story: Cyber Sleuth: This is a weird Persona-ish thing that came out of nowhere and is actually pretty good.

XCOM 2 – I played the tutorial and it was nice and a little buggy, but I still want to play more. But, geez, there’s so much stuff coming out and I’ve already played a lot of XCOM. I’ll come back to you, buddy.

Shrub Bubs – I helped a cactus learn to love again.

Firewatch – So, uhhh, Firewatch sure was something wasn’t it? [shrug]