This dog is not good at typing.

Following in the footsteps of Typing of the Dead and Icarus Proudbottom, new typing games have some strong competition. It’s easy to make a boring typing game if you don’t tie some cool trappings around slamming keys in the right order. If you took typing in elementary/middle school you’ve probably already seen the worst there is to see. If only Cooldog had been around then.

Cooldog Teaches Typing won me over in less than five minutes, and you’ll finish it in under ten. It’s a comedy typing game about a dog (a cool one) who is a self-proclaimed legendary typist. His goal is to help you climb the ranks of the legends and become one yourself. Also, he can’t spell very well and doesn’t seem to understand how typing works. I could go on to ruin a bunch of the best surprises, but I’d rather you take the couple minutes to see them for yourself. It’s worth it. 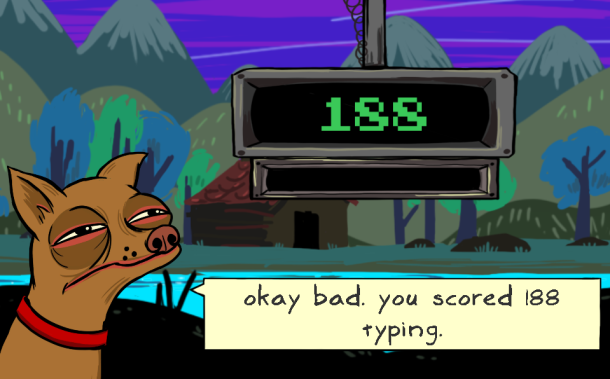 The game was made by @onefifth in only 3 days for the Toronto Game Jam, and it’s a cute thing to spend some time with. The best jokes are front-loaded into its opening so I can’t shame you too hard if you don’t finish it. But it’s cute, clever, smart, and made me laugh out loud a several times. In fewer words and a fraction of the time of most other games, I’d say that’s a pretty decent accomplishment.

Check out how Cool this Dog is right here. Typ reeal guud pleaes.