Monster Hunter has been a permanent part of my gaming library since 4 Ultimate’s release on the 3DS in 2015. Though I do miss the ridiculous variety of monsters present in the last two games, Monster Hunter: World is unequivocally the best game in the series.

Trying to understand any previous entry is to essentially commit an act of violence against yourself, bashing your head against a brick wall that has no intentions of moving. World may still have that wall in place, but this time it’s made out of about half as many bricks.

It’s a series infamous for pushing people away due to obtuse systems that make no sense to anyone who hasn’t already been inundated with them, but World actually makes some leaps towards gaining a real, mainstream audience. The multiplayer has never been easier to play with friends (though it’s still not perfect!), it’s actually on a console that can somewhat deal with the complicated control schemes, and the myriad quality of life changes (you can access your inventory stock during a quest, what a concept!) go a long way in getting newcomers adjusted to Monster Hunter’s strange, complex world. It helps that the game feels more alive than ever by removing loading screens, adding an honest-to-god true ecosystem and food chain, and tossing in dozens of tiny creatures that you’re encouraged to capture and keep as pets. Hunting the monsters is pretty fun, too, I guess. 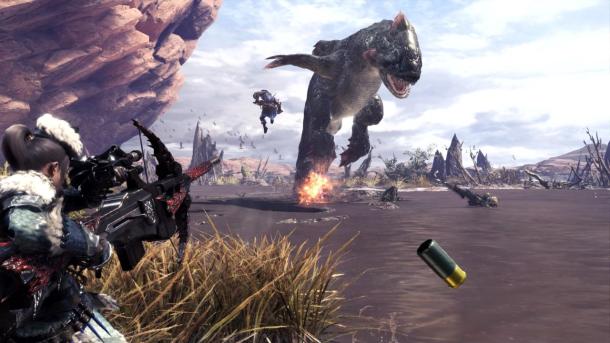 As for returning vets, there’s plenty for us, too. Some weapons have new movesets and abilities. The long-ranged weapons feel viable for the first time due to the good controls and added mobility. Maps are hiding more secrets than ever before, and just walking around and exploring fills in areas on the map, making it feel like the hunt it was always meant to be. There’s more good things about Monster Hunter: World than I could ever list here, but know this: the changes, big and small, make for one of the best games you’ll play all year.

There’s a lot to uncover as you make your way through the newest Monster Hunter game, so much so that I’m 100 hours in and was just told by a friend about a series of quests that I didn’t even know existed that I’d somehow walked right by again and again.