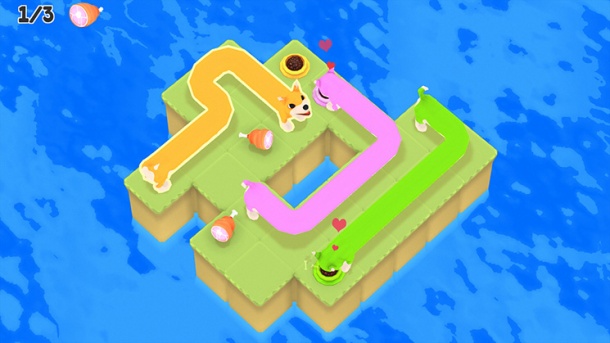 If you’ve never played Stephen’s Sausage Roll, (which you probably should) it’s a puzzle game about maneuvering a sausage around a grid. The goal is to avoid obstacles to move one item on a grid to another spot on the grid, all while following an increasingly complex set of rules to do so.

Now imagine that instead of having a sausage, you had puppy dogs. Now imagine the sausages… I mean puppies are very stretchy. Alright, you know as well as I do that this explanation isn’t going anywhere and we both understand that now. Just, like, if you think puzzle games are cool then play this one.

Puzzle Puppers is the first Sokoban-like since Steven’s Sausage Roll that captures the warm sense of pride in a puzzle well-solved. Puzzle Puppers is about moving colorful, stretchy dogs around a grid to get them to their food bowls. It’s also a very solid use of 2 hours, as long as you don’t mind pulling your hair out a bit here and there. The game starts off easy enough, move one puppy from Point A to Point B, and complete the bonus objective of collecting all of the meats on your way to the goal. Then you’ll get two dogs. Then you’ll have to guide them through water traps. Then you’ll have to help three dogs bounce off of each other to avoid water traps… and then you may end up skipping a level or two as you decide these dogs may need to just go hungry for a little while.

The game’s difficulty curve is about as smooth as they come. I was able to 100% the first couple of chapters (20 levels), had to skip a few stages in the third chapter, and by the end of the fourth chapter I was lucky to fully complete any two levels in a row. Puzzle Puppers is a very short experience (roughly 2 hours, maybe another hour or two if you 100% everything) but the puzzles felt fresh through the majority of its runtime. Just when I thought I had mastered a new obstacle, the game was kind enough to remind me that it was still much smarter than me, and probably would continue to be for the foreseeable future. By the last half hour, I had conceded that the game was too powerful, and I bid it farewell.

Puzzle Puppers is smart about allowing you to control the difficulty in a way that makes it as accessible as you need it to be. Even though just a handful of stages felt more mentally taxing than I cared to plow through, I was never stopped from reaching the end of the game. Only a very small number of stages are locked off through skipping, and I was able to leave with a satisfying experience, and with the feeling that I had seen everything I wanted to. More hardcore players can feel free to 100% the toughest stages, but the brain-teasers I played through were exactly as rewarding as they needed to be, and bouncing off of a puzzle after staring at it for an hour is a kind of stubbornness only The Witness can bring out in me.

The few gripes I have don’t have anything to do with the quality of the puzzles, but a lack of variety in the package as a whole. The music plays on too short of a loop and you hear the same track over and over. The environment stays “small green island in the ocean” throughout the whole game. Some of the mechanics are used too much, and I could’ve done with a new wrinkle or two tossed in to spice the play up.

But none of that should dissuade you from giving Puzzle Puppers a shot. It’s five bucks and worth a couple hours of your time. Give some of the tougher puzzles a try and I promise you’ll feel pretty smart by the end. And, come on, those pups are cute, wag their tails, and bark occasionally. Puzzle Puppers isn’t going to change your life, but it’s just… pleasant. And sometimes pleasant is more than enough.

This article is written based on a copy of the game provided by the publisher.