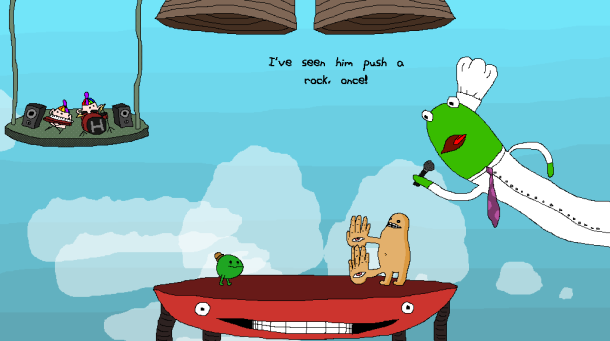 Bowler is an extremely weird game. It’s also absolutely ~my~ kind of game. I just wish it had stuck around a bit longer than it did.

Within the first five minutes of Bowler, you’ll know if you want to keep going. For me, I had already laughed out loud and had made preparations to continue playing it for the next hour if need be. Sadly, there were only about ten minutes remaining, and Bowler went away as quickly as it had appeared.

Since it’s so short, and the fun is seeing the surprise that’s packed into its runtime, I’m going to keep this spoiler free. The setup is as follows: You’re a little green guy who has entered into a game show in order to win an unspecified prize. And uh, that’s certainly not all that happens.

Brief moments of a story flash in between rounds, and this made me think that it was building towards something that, well, it really doesn’t. It’s an odd game with a unique sense of humor, and if you’ve ever enjoyed anything by thecatamites, increpare, or gargonherd, you’ll feel right at home in Bowler. I hadn’t heard of the developer, Piz_Wiz, before this, but they’ll be on my radar from now on.

If you’re up for seeing what happens once you enter a battle arena / game / cooking show(?), check out Bowler on its itch.io page.